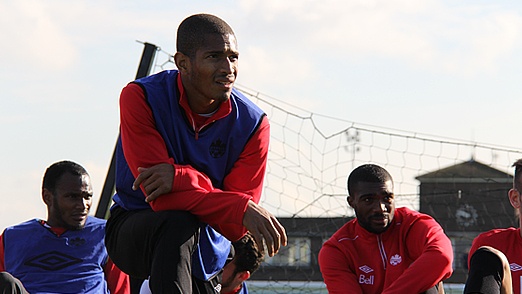 Canada gearing up for Australia clash.

In their second camp under Benito Floro, Canada’s Men’s National Team’s preparations entered the home stretch as they made the move into central London in advance of Tuesday’s Men’s International Friendly against Australia at Craven Cottage in London, ENG (local kick-off 20.00; 15.00 ET / 12.00 PT).

The team had been based out near Heathrow airport southeast of London all week and training at the facilities of Queen’s Park Rangers of the English Championship. The team just scrimmaged on Saturday morning before heading into London.

The team will be off the field on Sunday and will instead focus on regeneration and getting treatment before getting back on the field on Monday—only this time it will be at Craven Cottage, the home of Barclay’s Premier League Club Fulham FC, which is the site of Tuesday’s game.

Dylan Carreiro and Michael Petrasso, both 18-years-old and members of QPR’s Elite Development Squad, took part in their final session with the Canadian team on Saturday before returning to their club. They won’t be involved in Tuesday’s game.

Another QPR connection in the Canadian camp was with assistant coach Marc Bircham. Bircham, who is the QPR Elite Development Coach, earned 17 caps for Canada and famously scored on his debut in 1999. That goal landed was infamous in that Bircham had scored for Canada and yet had never actually set foot on Canadian soil.

The squad will be bolstered Saturday night by the return of striker Iain Hume. Hume had temporarily left the Canadian camp to join up with English club Preston North End of League One who were in action against Crewe Alexandra F.C.