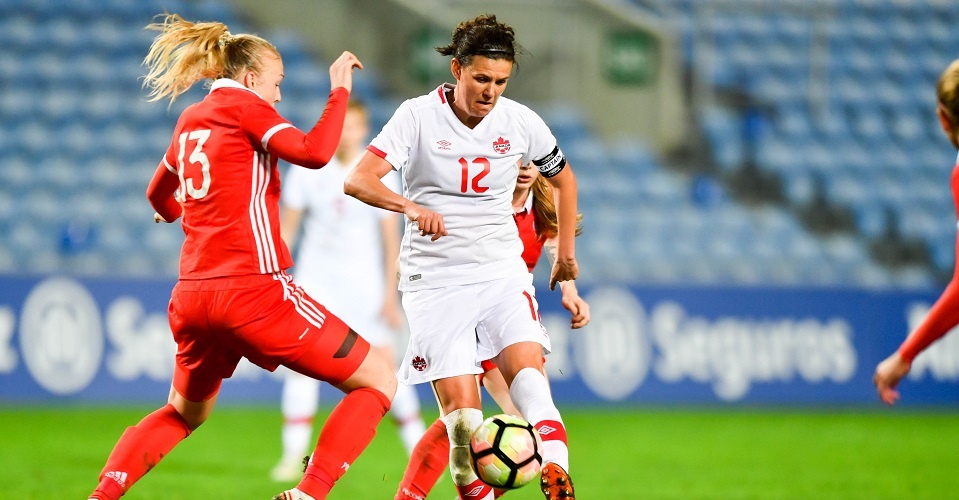 Canada came away with a 1:0 victory in its second group stage match of the 2018 Algarve Cup after featuring a different lineup from its opening […]

Canada came away with a 1:0 victory in its second group stage match of the 2018 Algarve Cup after featuring a different lineup from its opening match.  Playing a 3-5-2 formation with Christine Sinclair and Jordyn Huitema on the front line, Canada dominated their opponent with an aggressive attack up the sidelines.
Canada’s lone goal was scored in the 25th minute after Huitema was pulled down in the box by Russian captain Anna Zozhnikova.  Canada’s captain and all-time goals leader Sinclair made no mistake by drilling the ball low into the corner. It was Sinclair’s first goal of the tournament and the 170th of her international goal, putting her only 14 behind the all-time women’s international goalscoring record.
While the squad featured plenty of youth, with eight starters 25 or younger, another veteran player that made her mark was goalkeeper Erin McLeod. It was McLeod’s international comeback appearance after a two-year absence while recovering from ACL surgery. McLeod posted her 44th career clean sheet in the 1:0 victory. Prior to tonight’s Algarve Cup group match against Russia, McLeod’s last international match with Canada qualified the squad for the Rio 2016 Olympic Games at the 2016 CONCACAF Women’s Championship in Texas, USA back in February 2016.
“Russia played a very defensive style, which was as expected,” said Canada Soccer Women’s National Team Head Coach Kenneth Heiner-Møller after his first victory the helm.  “We kept to our game plan, moving the ball wide and working our way through their block so we are happy with that, but I think the praise should go to their goalkeeper (Elvira Todua) who made some world-class saves tonight.
“The team fought hard tonight, and some of our young players got some important international minutes, but now our focus shifts to Korea Republic, who will be a very different opponent with more speed and passing quality.”
The other match up in Group B resulted in a 1:1 draw between Sweden and Korea Republic.  Across the groups,  hosts Portugal drew Australia 0:0; Norway defeated China PR 2:0; Japan defeated Iceland 2:1;  and Netherlands defeated Denmark 3:2.
Canada’s final group stage match of the 2018 Algarve Cup, the prestigious annual international women’s soccer tournament in Portugal, is against Korea Republic on 5 March with a 15.00 local kick off at Estádio Municipal de Lagos (10.00 ET / 07.00 PT). To date, Canada have posted a record of six wins and one loss in seven matches against Korea Republic, but the last two matches in 2015 were both one-goal victories.

In 2017, Korea Republic posted an international record of five wins, two draws, and six losses in 13 matches. Korea Republic are gearing up for their AFC Women’s Asian Cup in Jordan in the month of April.
Canada’s position coming into the final matchday, 7 March, will be determined by headed to match results and goal differential.
Fans can follow Canada’s journey on the road to the FIFA Women’s World Cup France 2019™ across Canada Soccer’s digital channels including CanadaSoccer.com, Facebook, Twitter, and Instagram.

UPCOMING HOME MATCH in HAMILTON, ONTARIO
Individual tickets to the Canada v Germany match will go on sale to the public on International Women’s Day, Thursday 8 March, via Ticketmaster.ca. The launch of ticket sales will be preceded by a 48-hour pre-sale for Canada Soccer Insiders. Tickets to the match start as low $20 (plus applicable fees) and fans will once again be able to take advantage of a ‘Me+3’ offer in select sections.