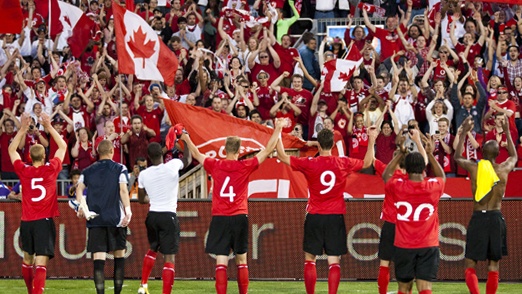 Canada’s men’s national team has arrived in Toronto in advance of this weekend’s Men’s International Friendly match for the Canadian Soccer Association’s centennial celebrations. The Canadian team has arrived from Florida, USA, where it trained in the heat at its usual all-in-one, hotel-and-training complex. Canada is currently preparing for two FIFA World Cup Qualifiers, the first of which will be played in Ciudad de la Habana (Havana) in Cuba.

Canada will face USA on Sunday 3 June 2012 at BMO Field in Toronto. The match will kick off just after 19.00 local, with a live coast-to-coast broadcast on Sportsnet East, Sportsnet Ontario, Sportsnet West and Sportsnet Pacific (19.00 ET / 16.00 PT).

Canada will train on Friday morning at the new Toronto FC Training Site, while opponent USA will train at the same location in the late afternoon. Both Canadian coach Stephen Hart and USA coach Jürgen Klinsman will take part in a press conference at BMO Field at 14.30 (with a player from each team also to be present).

After the Sunday match, Canada then plays two matches in FIFA World Cup Qualifiers: Cuba away on 8 June in Havana and Honduras at home on 12 June in Toronto. Tickets to Canada’s 2012 home matches are available via ticketmaster.ca or by phone at 1.855.570.7500, with full information available on CanadaSoccer.com. Group discounts are available via marketing@soccercan.ca or 613.237.7678.