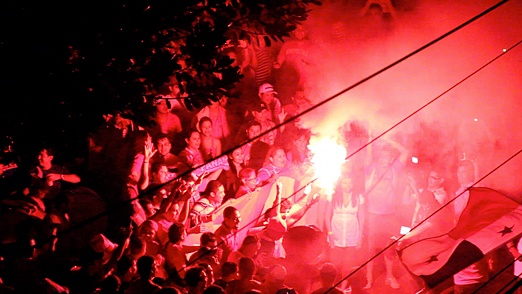 Canada has arrived safely in Ciudad Panama this Sunday 10 September 2012 in advance of the Tuesday FIFA World Cup Qualifiers match against Panama. The team traveled via a charter plane from Toronto to Panama’s capital city. The team will have a day of training at the official stadium before playing its match on Tuesday night.

Since arriving in Panama, Canada has been greeted by passionate Panamanian fans who have sought to distract the team from its mission to earn a result on foreign soil. The fans were parked in front of the Canadian hotel on Sunday night beating their drums and delivering unique welcome chants to the Canadian players.

Canada currently occupy top position in Group C in the 3rd Round of the 2014 FIFA World Cup Brazil™ Qualifiers after Friday’s win over Panama. Previously in the group, Canada defeated Cuba 1:0 away from home and earned a 0:0 tie against Honduras at BMO Field in June. Only two teams from this group will advance to the CONCACAF Final Round in 2013.

The six-match semi-final round runs June through October, with Canada’s next home match on Friday 12 October at BMO Field in Toronto. Tickets to that Canada-Cuba match are available via ticketmaster.ca or by phone at 1.855.570.7500, with full information available on CanadaSoccer.com. Group discounts are available viamarketing@soccercan.ca or 613.237.7678. Following the Canada-Cuba match, Canada will travel to Honduras for the last group fixture on 16 October.

For full coverage of Canada’s road to the 2014 FIFA World Cup Brazil™, fans can follow all the news at CanadaSoccer.com. Fans are also encouraged to connect with Canada’s national teams via Twitter.com/CanadaSoccerEN, Facebook.com/CanadaSoccer, Flickr.com/canadasoccer, and YouTube.com/CanadaSoccerTV.