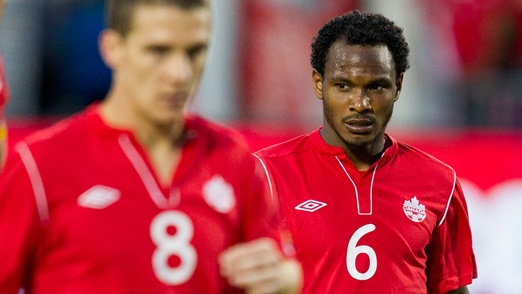 Canada to face Trinidad and Tobago in Lauderhill, FL.

Canada has announced its 18-man roster for the 15 August Men’s International Friendly against Trinidad and Tobago at Central Broward Regional Stadium in Lauderhill, FL, USA.

The assembled group features a number of Canada’s North American-based players, a selection of European-based players and four new call-ups to the Canadian team.

Doneil Henry, Russell Teibert, Evan James and Lucas Cavallini will all be taking part in their first camp with Canada’s national team. All four players were part of the Canada team that made it to the semi-final stage at CONCACAF Men’s Olympic Qualifiers in March 2012.

“Though this is only a 72-hour FIFA window, the game will serve us well in terms of building towards the FIFA World Cup™ Qualifiers in September,” said Canadian head coach Stephen Hart.

Canada is preparing for the resumption of the CONCACAF 3rd Round of 2014 FIFA World Cup Brazil™ Qualifiers, beginning with a crucial pair of matches against Panama in September.

Panama will pay a visit to BMO Field in Toronto, ON on Friday 7 September (19.30 local). Tickets to the match are available at Ticketmaster.ca or by phone at 1.855.570.7500. Ticket purchases for groups of 10+ can be coordinated through the Canadian Soccer Association’s marketing department: marketing@soccercan.ca


Canada will then travel to Panama for the return fixture on Tuesday 11 September.

After two of six matches Canada currently sits in second place, two points behind Panama in Group C of the CONCACAF 3rd Round. Only two teams will progress from Group C – a group that also features Honduras and Cuba – to the ‘hex’, CONCACAF’s final round of 2014 FIFA World Cup Brazil™ Qualifiers.

Hart has elected to call eight players into the squad for the 15 August friendly that did not feature in Canada’s most recent matches in June.

In addition to the four players earning their first call-ups, Canadian-based MLS midfielders Terry Dunfield and Patrice Bernier have earned recalls. Meanwhile, Marcel de Jong and Jonathan Beaulieu-Bourgault have overcome injuries sustained during club play in Germany to return to the national team.

Canada has not faced Trinidad and Tobago since the two nations squared off a remarkable five times in 2000. The Canadians posted a record of two wins, one draw and two losses against the Caribbean nation during that year.

Canada’s memorable 1:0 win over Trinidad and Tobago in the CONCACAF Gold Cup semi-final on 24 February 2000 crowned the Canadians as champions of the region and earned the team a place at the FIFA Confederations Cup Korea/Japan 2001.

The match against Trinidad and Tobago on 15 August will be Canada’s fifth fixture of the year. Stephen Hart’s side has a record of one win, two draws and one loss so far in 2012.