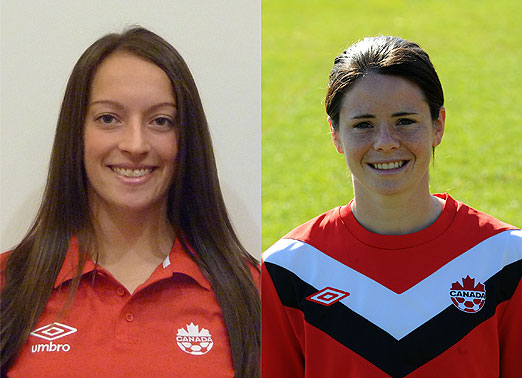 Young Mottershead in, injured veteran Matheson out before return to Vancouver.

Canada has announced it will add Alyscha Mottershead to its 20-player roster for the upcoming 2012 CONCACAF Women’s Olympic Qualifying Tournament. Mottershead will replace Diana Matheson, who has not yet returned to full fitness following surgery in November. Mottershead had already been training with the Canadian team in California and will board the team flight to Vancouver on Saturday 14 January.

“It is a big loss not to have Diana Matheson for this tournament, but it opens the door for a young player like Alyscha Mottershead to make her mark on this team,” said Canadian head coach John Herdman. “It is massive not to have Matheson and her experience on the pitch, but she will ve there to support us off the pitch in Vancouver.”

Matheson’s 130 career appearances rank third in the Canadian record books, behind one-time record holder Andrea Neil (retired, 132) and current captain Christine Sinclair (168). Matheson does hold the record for consecutive Canada matches, having once played in a streak of 45 straight matches. In 2010, she scored the winning goal in the Cyprus Women’s Cup final and was a year-end runner-up in voting for the Canadian Player of the Year award.

In 2011, Matheson scored one goal and four assists in 21 matches, including an assist on Sinclair’s game-tying goal in the Pan American Games championship final. Shortly after that gold-medal victory, Matheson underwent surgery and began rehabilitation in preparation for the 2012 CONCACAF Women’s Olympic Qualifying Tournament. She is not yet ready to return to international duty, although she will remain with the team in Vancouver in an off-the-pitch leadership role.

Mottershead had already been training with the Canadian team in California in case Matheson was not ready to join the tournament roster. Mottershead of Brampton, ON is just 20 years old, having made her international debut in November as a substitute in Canada’s 2:1 victory over Sweden. She currently plays her club football at Syracuse University in USA.

While this will be Mottershead’s first participation in an international “A” competition, she does have the experience from both the 2008 CONCACAF Women’s Under-17 Championship (bronze) and inaugural FIFA U-17 Women’s World Cup New Zealand 2008. She wore the captain’s armband in Canada’s 1:0 victory over Mexico to qualify for New Zealand 2008. In all, Mottershead profitted from more than 100 days in the Canadian youth program dating back to 2006.