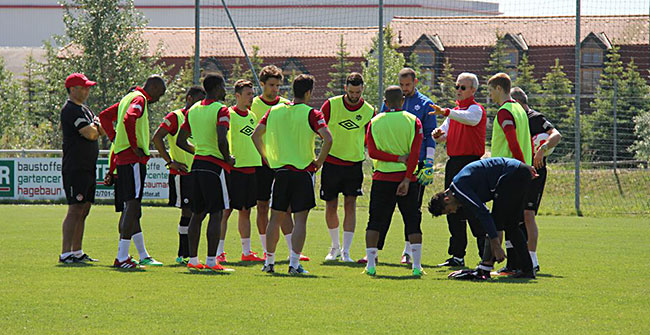 The small town of Laa an der Thaya, AUT sits right near the border with the Czech Republic. It’s about as sleep and unassuming a European town as you can get and for the past few days it’s played host to Canada’s Men’s National Team.

In the team’s second camp of the year, Head Coach Benito Floro has brought in much more experience than was in the first camp of the year in January. That said, there still is a healthy mix of younger players looking to impress.

“For the younger players, it’s a very good experience,” said Floro after the team’s training session on Thursday. “Our experienced players are very good people and they are always focused on teaching the young players how to do things in a good way. “

The team will travel on Friday to another small town, Ritzing, for the first of two men’s international friendlies the team will play in their European camp at 17.30 local time / 11.30 ET / 8.30 PT against Bulgaria at the Sonnenseestadion.

Bulgaria comes into the match having missed out on qualifying for the 2014 FIFA World Cup Brazil after they finished in fourth place in UEFA qualifying Group B.

While their results weren’t enough to get them to Brazil, they were involved in close games throughout and even picked up draws with the Czech Republic, Denmark, and Italy so Canada will be in tough against a very good team.

“I think it will be a very difficult game for us because Bugaria has another level, but our lineup is good,” said Floro. “I believe in our possibilities because the players are convinced they are able to do a good game. The result is always a lottery but for us, it is important to play well.”

Friday’s game will not be televised but fans can get full coverage of the game. Live updates will be available on Twitter @CanadaSoccerEN and @CanadaSoccerFR and CanadaSoccerTV will have post-match interviews and highlights.