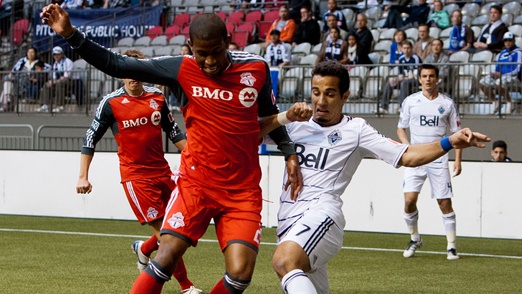 With the aggregate score level at 1:1, Toronto FC will welcome Whitecaps FC to BMO Field on Wednesday evening (20.00 ET local kick-off) for the match that will determine the winner of the 2012 Amway Canadian Championship.

The winner of the Championship final will hoist the Voyageurs Cup and will be entered as Canada’s representative in the 2012-13 CONCACAF Champions League.

Wednesday’s second leg of the final will be broadcast nationally on Sportsnet ONE at 20.00 ET / 17.00 PT. Fans can also follow the match on Twitter: @CanadaSoccerEN. Complete pre and post-match coverage will be available at CanadaSoccer.com/Championship, as well as on Facebook. Video highlights will be available via YouTube.com/CanadaSoccerTV.

The final is primed to be an exciting one with Toronto FC looking to defend their title for the fourth year running, while Whitecaps FC will be eagerly looking to claim their first Canadian Championship.

Toronto took a 1:0 lead in the first leg of the final courtesy of a Ryan Johnson header before Eric Hassli equalized for Vancouver late in the match with a venomous volley.

The 2012 Amway Canadian Championship serves as the qualification tournament for the 2012-13 CONCACAF Champions League. The winner of the Champions League will go on to represent CONCACAF at the 2013 FIFA Club World Cup.