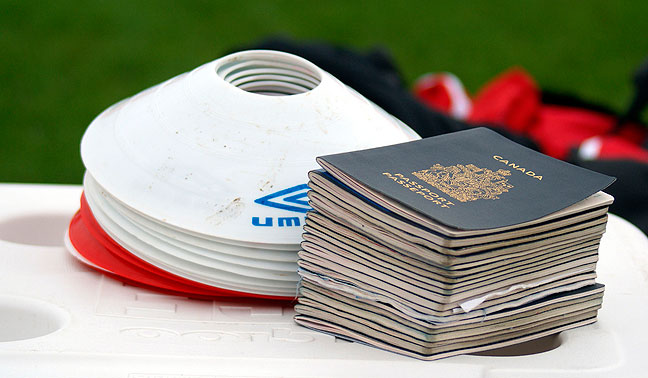 Competition starts Wednesday 2 May in Montréal and Edmonton

Canada’s four professional clubs have submitted their rosters for the 2012 Amway Canadian Championship. Clubs can submit up to 30 names for the competition, with condensed 23-player lists to be submitted 48 hours in advance of each match. Clubs can dress 18 players for each match, of which 11 will start and three can enter as substitutions.

From 2-23 May, the four Canadian teams will participate in the 2012 Amway Canadian Championship. The tournament runs on four consecutive Wednesday nights, with the home-and-away semi-final legs on 2 and 9 May (Edmonton against Vancouver and Montréal against Toronto) followed by the home-and-away championship legs on 16 and 23 May. The winner not only emerges as Canada’s champion, but also stands to represent Canada in 2012-13 CONCACAF Champions League.

At the onset of the competition, three teams have posted rosters with 25 players (Vancouver Whitecaps FC, FC Edmonton and Toronto FC) while one team has posted a complete roster of 30 players (Impact Montréal). The three teams that submitted fewer than 30 players can later add up to five new players until they have filled their 30 roster spots. A player must appear on the club roster to be eligible to compete in the Amway Canadian Championship. After featuring in a match with one club, a player may not appear for any other club for the duration of that season’s Amway Canadian Championship.

Twenty-three of the 31 Canadians have international experience at either the national “A” or youth level. The seven full internationals are Monsalve of FC Edmonton (one appearance), Julian de Guzman (53), Adrian Cann (9), Terry Dunfield (9) and Ashtone Morgan (2) of Toronto FC, and Bernier (46) and Greg Sutton (16) of Impact Montréal. The group of 16 players with youth experience includes recent U-23 call-ups Alderson and Russell Teibert of Whitecaps FC, Michal Misiewicz, Shaun Saiko and Kyle Porter of FC Edmonton, Doneil Henry and Matt Stinson of Toronto FC, and Evan James or Impact Montréal.

In all, 68 of the 105 footballers are new to the Away Canadian Championship. The Impact feature the most new players (26 of 30), which is explained by their admission into a new league this 2012 calendar year (they are an expansion team in Major League Soccer). Three-time defending champion Toronto FC features the most returning players of any club, although their returning tally (12 of 25) does not include “new” players such as Ryan Johnson, Danny Koevermans and Torsten Frings (players that joined Toronto FC last season, but after the 2011 Canadian Championship).

Recently-signed backup goalkeeper Quillan Roberts of Toronto FC is the youngest player in the competition at just 17 years of age. The seven other teenagers are Alderson, Teibert and Omar Salgado of Whitecaps FC, Michael Cox of FC Edmonton, Henry, Stinson and Oscar Cordon of Toronto FC, and Karl Ouimette of Impact Montréal. The oldest player in the competition is Impact striker Sebrango (39), who also happens to be the competition’s leader amongst returning players in appearances (nine) and goals scored (two). Sebrango is one of six masters aged 35 or older, along with Lee and Joe Cannon of Whitecaps FC, Frings of Toronto FC, and Sutton and Bernardo Corradi of Impact Montréal. The average age of all 105 players is approximately 25 years and six months.