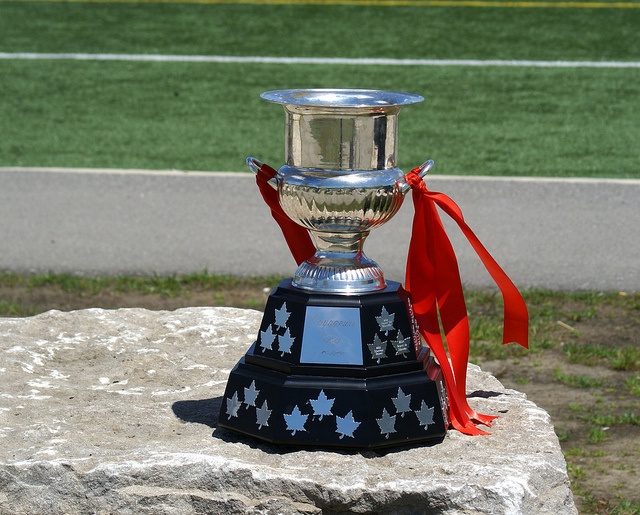 A brief history of the Amway Canadian Championship.

This year marks the fifth edition of the Amway Canadian Championship, with the 2012 professional soccer championship scheduled to kick off on 2 May in Edmonton and Montréal. Six matches will be played over four Wednesday nights, with the semi-final series on 2 and 9 May and the championship final series on 16 and 23 May. The four competing teams are Vancouver Whitecaps FC, FC Edmonton, Toronto FC and Impact Montréal.

In advance of the 2012 schedule, CanadaSoccer.com takes a quick look back at the first four editions of the Amway Canadian Championship.

2008 CHAMPIONSHIP
In year one, the Championship got off to what might have been an expected debut, with Toronto FC winning the opening match against the Impact, who at the time was playing in a lower division. Despite the 0-1 defeat, the host Impact showed the gap was much smaller than what many had imagined. The Impact created its chances and held its opponent off the score sheet until the 72nd minute when Marco Velez scored the first-ever goal in the championship.

The Impact translated its opening-day performance into back-to-back wins against Vancouver Whitecaps FC. Then on Canada Day 1 July, the Championship was turned on its head as visiting Vancouver (at the time also a lower-division team) upset Toronto FC with a 1:0 win at BMO Field. Martin Nash scored the lone goal on a penalty in the first half. Then Jay Nolly and the backline held down the fort as an attacking Toronto FC could not find the back of the net despite its countless chances in the second half.

Eight days later, Vancouver followed up its Canada Day result with a home 2:2 draw against Toronto FC. The Toronto visitor had all but wrapped up a 2-1 win before Eduardo Sebrango scored an 87th minute equaliser for Whitecaps FC.

The Vancouver draw set the stage for a memorable finale between Toronto and Montréal at BMO Field. Toronto was now in a must-win situation, while the Impact needed but a draw to clinch the national title. Rohan Ricketts gave Toronto a 1-0 lead in the 15th minute, but Roberto Brown leveled Montréal just 11 minutes later. Montréal held Toronto and lifted the trophy while goalkeeper Matt Jordan earned George Gross Trophy honours.

“It was a total team effort,” said Jordan. “We came here to play. We played and we attacked. This (BMO Field) is not a place you can come in and sit back.”

2009 CHAMPIONSHIP
Unbelievable, but true: while Toronto FC’s 2009 Amway Canadian Championship season may have started and finished the way it had envisioned, the road to the title was nothing but improbable.

It took Toronto less than three minutes to score the Championship’s opening goal in 2009, with Kevin Harmse scoring the lone goal of a 1:0 win over Whitecaps FC. Toronto’s inability to add a second goal, however, became all-the-more poignant after another 1:0 victory one week later against Impact Montréal. Chad Barrett found the back of the net once, but failed on a breakaway while Sam Cronin and Dwayne De Rosario both hit the woodwork.

Before Toronto FC would play again, Whitecaps FC would collect six points with back-to-back wins and three goals scored. Then on 2 June at Swangard Stadium, Whitecaps won 2:0 over Toronto FC to open what appeared to be a comfortable four-goal cushion. Toronto FC could still equal Vancouver on nine points with a Match Day Six victory over Impact Montréal, but it would need to win big to overcome the goal differential and win the Championship.

Things went from bad to worse for Toronto FC after Impact’s Tony Donatelli made it 1-0 at Stade Saputo on a penalty. The Whitecaps cushion was now five goals. Just before the half hour mark, though, 2009 George Gross Trophy winner De Rosario scored his first of three goals to kick off an incredible finale. The outmatched Impact team, with some of its best players on the bench resting for an important weekend league match, could not stand up to the determined Toronto FC team that suddenly had it in them to win it all.

Toronto FC scored six goals in all, including the fifth by Barrett that turned out to be the competition winner. Just one year after a disappointing tournament loss to the Impact, Toronto FC was crowned Canadian champions to the disappointment of the stunned runner-up Whitecaps FC.

2010 CHAMPIONSHIP
By Season Three, Canadian fans were well versed in the unexpected turns that a six-match Amway Canadian Championship could deliver. For the first time, the six matches were scheduled on six consecutive Wednesday nights, with all six matches broadcast by Sportsnet for coast-to-coast television coverage.

Defending champion Toronto FC got off to the start it expected, winning six points in its first two matches with three goals scored. Toronto FC’s six points, however, all came against the Impact, so the Whitecaps remained quietly optimistic after it opened with a 1:1 draw against the Impact on Match Day 2.

On Match Day 4, the Whitecaps drew 1:1 in their second match, this time against Toronto FC. The Whitecaps remained hopeful that the Championship could sway in its favour, although it knew it now needed back-to-back wins against the Impact and Toronto FC to win the title. Anything less was not enough.

In the penultimate match just one week later, Vancouver held an all-too brief 1-0 lead in the second half, but was eliminated following the final result of a 1:1 draw in Montréal. Despite going on to finish the tournament undefeated in four matches (with an 0:0 draw in Toronto one week later), the Whitecaps finished a distant second with half as many points as the two-time champions Toronto FC. For the second year in a row, Canadian star De Rosario was the George Gross Trophy winner.

“It is nice to be named champions and advance in this competition,” said then-Toronto FC head coach Preki. “We did what we needed to do in the first couple of games, so we took the pressure off ourselves.”

2011 CHAMPIONSHIP
The 2011 Amway Canadian Championship featured a fourth team and a new format, with the switch from the familiar round-robin series to a semi-final-then-final elimination campaign. The new team was FC Edmonton, who matched up against Toronto FC in one of two opening series; the other opening series featured Vancouver Whitecaps FC and Impact Montréal.

In one series, Toronto FC got off to an impressive start with a 3:0 win at Commonwealth Stadium in Edmonton, albeit only after the debutant team lost a man to ejection and played for 67 minutes with just 10 men on the pitch. Toronto FC then sealed FC Edmonton’s elimination one week later with a 1:0 win at BMO Field.

In the other series, Whitecaps drew first blood with an away 1:0 win at Stade Saputo. A week later, however, the Impact equalised with an away 1:0 win after 90 minutes at Empire Stadium in Vancouver. In extra time to determine a series winner, Mouloud Akloul gave Whitecaps a 2-1 series lead on aggregate in the 111th minute. The Impact’s goal scorer Ali Gerba nearly equalised in the dying minutes, but his header just went wide of the target.

In the Championship final, Whitecaps and Toronto FC drew 1:1 in the opening leg in Vancouver. One week later in the second leg in Toronto, the Whitecaps took a 1-0 lead before the match was abandoned due to lightning and the resulting unplayable field conditions from heavy rain. The final was rescheduled for five weeks later, at which point Vancouver again built a 1-0 lead that lasted into the second half.

In that second half, however, Toronto FC’s diminutive Joao Plata scored the equaliser on a penalty and then assisted on the winning goal scored by Mikael Yourassowsky in the 61st minute. With the home crowd on its side, Toronto FC held strong for its third consecutive championship and Voyageurs Cup. To no surprise, Plata accepted the George Gross Trophy as the most valuable player of the Championship.

“We deserved to win the game,” said Toronto FC head coach Aron Winter. “Even in the first half after we went down 1-0, I thought we reacted well. In the second half, we applied a lot of pressure up front and we were rewarded with the two goals.”

2012 CHAMPIONSHIP
So where does the story go from here? Fans will tune into the 2012 Amway Canadian Championship from 2-23 May to follow Canada’s top professional clubs in Vancouver, Edmonton, Toronto and Montréal. Only one team can emerge as Canada’s soccer champions and lift the Voyageurs Cup.