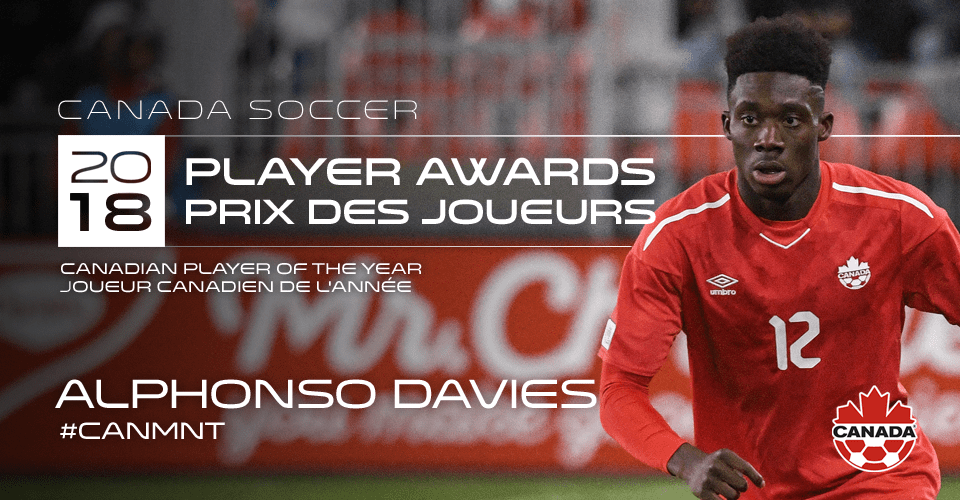 Alphonso Davies honoured with 2018 Canadian Player of the Year award

Alphonso Davies honoured with 2018 Canadian Player of the Year award

Alphonso Davies has been voted the Canadian Player of the Year after a standout season with Canada Soccer’s Men’s National Team and yet another breakout season with Vancouver Whitecaps FC. Of note, he helped Canada climb to current third-place position in qualifying and within a point of reaching the Concacaf Gold Cup and Concacaf Nations League Group A.

Davies of Edmonton, Alberta was honoured from a vote shared by Canadian media and Canadian coaches. Davies shared the 2018 Canadian Players of the Year award with co-winner Christine Sinclair from Canada Soccer’s Women’s National Team.

“He has been a standout performer for club and country and that is just a consistent reality now for Alphonso Davies,” said John Herdman, Canada Soccer’s Men’s National Team Head Coach. “For club, he picked up many an accolade, culminating with what looks like one of the biggest signings our country has ever seen.

“For Canada, every time he has been asked to take a responsibility and support the team, even playing out of position, he has shown his character. He is just a humble guy who loves the game and will do whatever it takes to be successful.”

In 2018, Davies won Vancouver Whitecaps FC Player of the Year honours after leading the league in duels won (258) and setting a record for dribbles completed (123). He scored eight goals, co-led the team with 11 assists (youngest player in league history to record double digit assists), was selected to the annual All-Star Game, and was named MLS’s best prospect in their 22 Under 22 Ranking. In July, his rights were transferred to Bayern Munich on an MLS-record transfer fee that could total more than $22-million US ($29-million Canadian), with Davies joining the German champions in late November after he turned 18 years old.

At the international level, his four assists in three matches were the second-most in a single season for Canada since 2000 when assists have been regularly recorded. He played in all 270 minutes of Concacaf Nations League Qualifying, fired six shots, and completed 95% of his team-best 151 attempted passes.

Help Canada climb to 3rd in #CNL Qualifying
Score the Whitecaps goal of the year
Move to Bayern on a record transfer deal
Win your 1st Canadian Player of the Year award#CANMNT #Phonzie https://t.co/ICVkNouqa6 pic.twitter.com/sd8k7mfBR4

2018 Canada Soccer Player Awards
This marks the 26th edition of the Canada Soccer Player Awards, with Alphonso Davies a first-time winner and Christine Sinclair a 14th-time winner for the Canadian Player of the Year award. Amongst men’s footballers, Davies finished first in voting ahead of runner up Atiba Hutchinson, third-place Jonathan Osorio, fourth-place Milan Borjan, and fifth-place Scott Arfield.