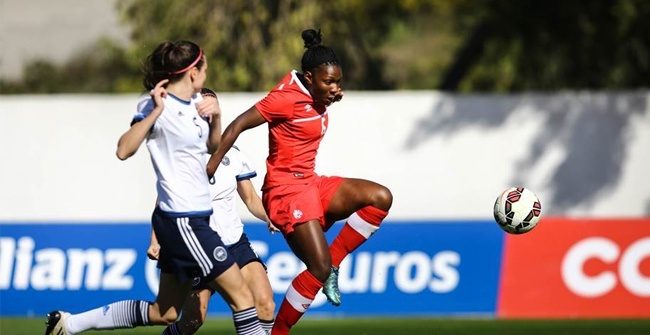 Canada’s Women’s National Team was narrowly defeated by Denmark 1-0 in Canada’s first appearance at the Algarve Cup since 2003.

Denmark’s lone goal was scored by Nadia Nadim in the 55th minute. Canada had several close chances during the game, but was unable to convert early on to take the lead, nor to make a comeback during a final push in the dying minutes of the game.

Going into the match, Canada had a 2-0-2 record against the Danes, with the previous two matches resulting in slim Canadian wins of only a one goal margin ( 2005: 4-3; 2000: 3-2). With 11 years since the last match between the two sides and Wednesday’s opening match of the Algarve Cup 2016, both teams took the pitch on even footing.

“You come into this sort of a competition and it’s obviously a step up from the CONCACAF qualification,” said Herdman after the match. “This Danish team narrowly missed out on qualifying for the Olympics and they are a big, strong, organised team. Labbé pulled out a couple of good saves, but the goal that we conceded was very soft – off a couple of ricochets.”

Playing all three teenagers on Canada’s roster, Herdman went into the game looking to trying out certain players in tough physical conditions, but also to test players in different positions, while under pressure.

“We tried Lawrence in at left-back, we gave Fleming a good run in the starting eleven alongside Rose and I think there were some good performances, but when we get great opportunities we’ve got to take them,” said Herdman. “We had chances and we just didn’t put them away, so I know the girls will be working on that when we get back to training.”

Working the midfield, Canada played a structurally sound passing game for much of the 90 minutes, often sending Belanger, Lawrence or Rose on runs down the line looking for crossing opportunities. Later in the game, with substitutes Sinclair, Tancredi and Carle up front, a strong push to try get the ball in front of a set of fresh strikers came up short despite a strong attack.

“Sinclair makes a difference. Her coming back on and combining with Matheson looked very good,” said Herdman of Canada’s captain, who suffered a minor strain during Olympic qualification. “We are hoping to get Sinclair back to full health this tournament, we’re just nursing her back, and get her in our starting eleven.”

Canada entered the Algarve Cup to get more experience against tough, physically imposing teams, something coach Herdman believes is key to preparing Canada for this summer’s Olympic Games, but also something he expects to see from Belgium and Iceland over the next two matches of the Algarve Cup group stage.

“I think genuinely this is a tough tournament,” said Herdman. “These European teams, they all have physically dominant players, so you know that every game is going to be tough and that’s what we’re challenged with. I think today was a little bit of rude awakening and as the game got tougher, our players seemed to suffer a bit. We had a twenty-five minute period where we really dominated and we probably should have been two goals up, but we just lost our steam in the second half and didn’t find our rhythm again until the last twenty minutes.”

In the other Group A match on 2 March, Iceland won 2:1 over Belgium. Canada will next face Belgium on Friday, 4 March at the Complexo Desportivo in Vila Real de Santo António.