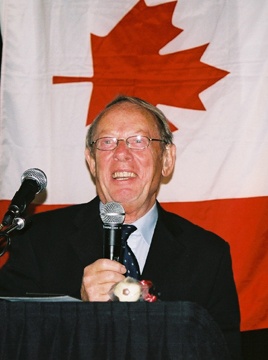 The Alberta Soccer Association congratulated its 2007 award winners at its annual general meeting. Amongst the winners was former Canadian Soccer Association president Jim Fleming who was awarded the President’s Award in recognition and appreciation of long-time involvement in Alberta soccer.

The Alberta Soccer Association congratulated its 2007 award winners at its annual general meeting in Calgary, AB. Amongst the winners was former Canadian Soccer Association president Jim Fleming who was awarded the President’s Award in recognition and appreciation of long-time involvement in Alberta soccer.

The Special Recognition Award went to the local organising committee of the FIFA U-20 World Cup. Edmonton was one of six host cities to the 2007 event which drew a tournament-record 1,195,239 and generated $259-million in economic impact. Edmonton enjoyed seven match days (nine games) including two Canadian matches and the semi-final between Austria (Österreich) and Czech Republic (Ceska Republika).

The adidas Golden Shoe Award was shared by five teams that won gold at the 2007 BMO National Championships. The senior champions were the Calgary Caledonions FC who won their second Challenge Trophy in five years (Hyundai Cup). The Caledonions won the 2007 final in Halifax, NS after a 5:0 victory over the Columbus Clan FC. Mark Slade was the goal-scoring hero with three goals in the final.

On both sides of the adidas Cup in Sherwood Park, AB, Alberta captured gold with the Calgary Elbow Valley Villains (U-16 Boys) and Calgary Foothills Colts ’91 (U-16 Girls). At the Sony Cup in Fredericton, NB, it was the Edmonton Juventus 89 that captured gold in the U-18 Boys competition. In the Western Masters division, Edmonton Victoria won the gold medal in Winnipeg, MB.

The Shield of Merit for long and outstanding volunteer service went to Bill Malone while the Award of Merit for significant contribution over a number of years went to Lynda Davies, Roger Chalk and Kieran McGarrigle. The Golden Whistle went to Herman Berristen.