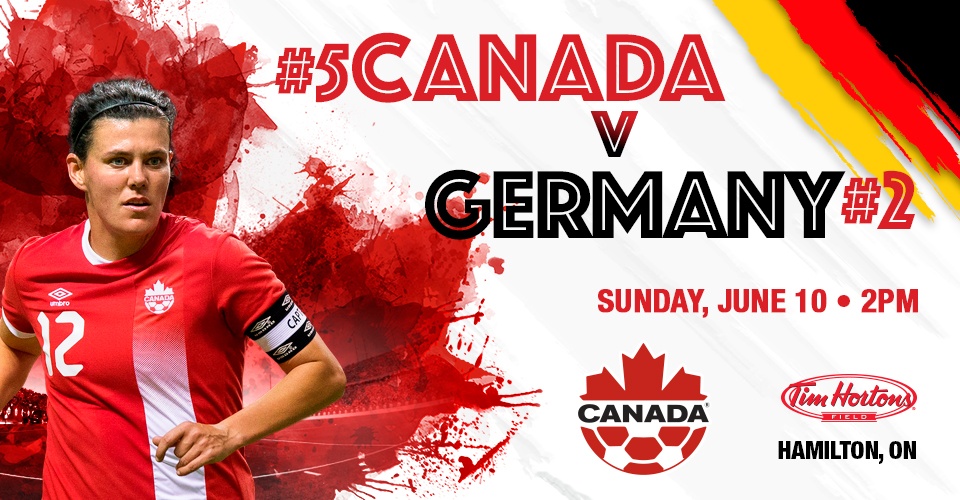 “This is a huge match for us as Germany are one of the top teams in the world, but also a side that has shown continuity in their ability to perform, get to the top, and stay there,” said Canada Soccer’s Women’s National Team Head Coach Kenneth Heiner-Møller.  “The match is critical for us leading into our FIFA Women’s World Cup qualifying campaign as it will test the relationships the players have developed, but it was also test us to see where we are as a team.”

Fans can anticipate an eventful match as the two top-five ranked teams, who have built a fierce rivalry over the past few years, battle it out in preparation for key FIFA Women’s World Cup Qualifiers.  Canada’s qualification opportunity will come in October at the 2018 CONCACAF Women’s Championship while Germany continue their qualification run through the ongoing UEFA qualification which comprises two group stages and a play-off round.

“Pitting ourselves against the best has been our strategy in building the technical qualities needed to reach our goal of becoming number one in the world, and Germany are one of the best,” said Heiner-Møller.  “But we expect this match to be quite different from what we will experience in the CONCACAF qualification tournament, so part of this experience will be testing our team against the reigning Olympic Champions and a potential FIFA Women’s World Cup challenger.”

The two sides have faced each other three times since the FIFA Women’s World Cup Canada 2015™, including in the third match of the Rio 2016 Olympic Tournament group stage when Canada, led by Ancaster’s Melissa Tancredi,  topped the eventual victors 2-1 at Estadio Nacional Mané Garrincha in Brasilia. Canada later fell 2-0 to Germany in the Olympic semi-final at Estádio Mineirão in Belo Horizonte, before going on to capture Olympic Bronze against Brazil.  Canada and Germany faced each other once in 2017, in a friendly in Erfurt, Germany where the home side topped Canada 2-1 with an 86th minute goal to secure the victory.

“This will be an exciting match for Canada Soccer, as it will mark Kenneth’s first home match at the helm of our National Women’s Team Program, but also because we will be returning to Hamilton – a city that continues to be a strong supporter of soccer and of our National Women’s Team,” said Peter Montopoli, Canada Soccer General Secretary.  “We are looking forward to returning to Tim Hortons Field to compete against a truly world-class opponent in Germany in front of a CanadaRED crowd.”

Canada last played in Hamilton in 2015 against England in its final preparatory match ahead of hosting the FIFA Women’s World Cup Canada 2015™.

Tickets go on sale on 8 March – International Women’s Day
Individual tickets to the Canada v Germany match will go on sale to the public on Thursday 8 March at 10.00am ET / 07.00 PT via Ticketmaster.ca. The launch of ticket sales will be preceded by a 48-hour pre-sale for Canada Soccer Insiders. Tickets to the match start as low $20 (plus applicable fees) and fans will once again be able to take advantage of a ‘Me+3’ offer in select sections.

For complete information visit the group ticket section on canadasoccer.com/tickets.

Supporters Section
Canadian Supporter Groups will be allocated dedicated seating in the Northeast end of Tim Hortons Field. Information about the Canadian supporter sections will be available via the Voyageurs website (thevoyageurs.org) at a later date. Please note that persistent standing will be permitted in these sections.

Visiting supporters will be located in the Southeast end of Tim Hortons Field. Fans wishing to sit in these sections should select “Germany supporters” from the drop-down menu on the Ticketmaster event page.

Canada Soccer, in partnership with its membership and its partners, provides leadership in the pursuit of excellence in soccer, both at the national and international levels. Canada Soccer not only strives to lead Canada to victory, but also encourages Canadians to a life-long passion for soccer. For more details on Canada Soccer, visit the official website at canadasoccer.com