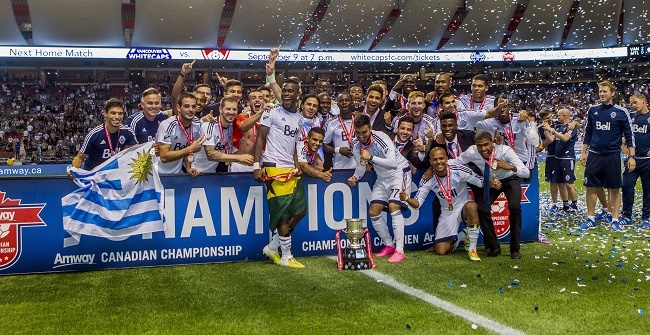 The semi-final round of the 2016 Amway Canadian Championship is set to kick off on TSN, Canada’s Home of the Champions, on 1 June. Ottawa Fury FC, who advanced past FC Edmonton in the preliminary round for the first time in their three-year NASL history, will meet current Voyageurs Cup holders Vancouver Whitecaps FC live on TSN 1. The other two-legged tie will see Toronto FC play Impact Montréal FC live on TSN 4. Ottawa and Toronto host the first leg matches while on 8 June the teams move to Vancouver and Montréal with both games live on TSN 2.

This is the ninth edition of the Amway Canadian Championship, which is Canada’s professional soccer pathway to the FIFA Club World Cup via the CONCACAF Champions League. Toronto FC have won the most Canadian championships with four followed by three for Impact Montréal FC while defending champions Whitecaps FC have a single victory.

Last year, 2015 Amway Canadian Championship winners Impact Montréal FC were 40 minutes away from CCL finals victory in front of 61,004 fans at Olympic Stadium. This year, Vancouver Whitecaps FC, as defending Canadian Champions, will learn their CCL fate on 30 May when the draw for the 2016-17 season is held in Miami Beach. The winners of the CCL represent CONCACAF in the FIFA Club World Cup, hosted in 2017 by United Arab Emirates.

The Amway Canadian Championship is the sole professional club championship in Canada and only method of entry to CONCACAF Champions League for Canadian professional clubs. It is hosted annually by Canada Soccer and is contested between the country’s three Major League Soccer clubs and our two NASL clubs. Winning clubs are awarded the Voyageurs Cup trophy.