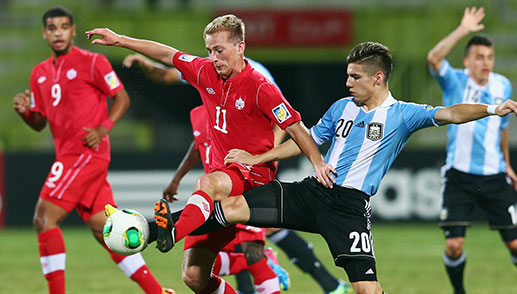 2013 Year in Review: the FIFA competitions

A recap of all four FIFA tournaments in 2013.

FIFA U-17 World Cup UAE 2013
Held in the United Arab Emirates, the FIFA U-17 World Cup ran from 17 October to 8 November. The tournament was filled with memorable moments, including the Golden Eagles’ fourth title, making them the most successful national team at this age level.

“I feel good, I feel good, I feel good” said Nigeria’s Kelechi Iheanacho after his team defeated Mexcio 3:0 to go undefeated and claim the title. Speaking to fifa.com after the match Iheanacho went on to say, “I’m feeling love form my teammates and my family and my country. I’m on a high from winning the World Cup and the Gold Ball.”

But the surprise of the tournament belonged to newcomer Sweden, who defeated Argentina 4:1 in the bronze medal match.

Canada played well at the tournament, but failed to advance beyond the group stage. After tying their first two games, against Austria and Iran, the Canucks needed a win in their final match to advance but were unable to defeat Argentina. Despite the loss, Coach Sean Fleming expressed pride in the characters of his players, especially their “resiliency to come back in games.”

Held in Brazil, this year’s edition of the tournament took place in six cities, with the final being held in Rio de Janeiro’s Estadio Do Maracana. In 2014, this world famous stadium will, once again, be in the limelight, hosting seven FIFA World Cup games, including the final on 13 July.

At the Confederations Cup, CONCACAF was represented by Mexico who found themselves in Group A, alongside Brazil, Japan and Italy. It was a tough group for El Tri who fell to their South American and European rivals.

The competition ended with a memorable 3:0 victory for Brazil over Spain, the defending World Cup Champions. According to FIFA, this dream final attracted record audiences; creating a broadcast sensation that has helped fuel anticipation for next year’s World Cup.

FIFA Beach Soccer World Cup Tahiti 2013
Reigning champs Russia overpowered Spain 5:1 to retain their title. The Russians were able to secure a comfortable victory thanks, in part, to their organization and work rate.

The tournament was held from 18-25 September on the Island of Tahiti, a semi-autonomous territory of France, located in the South Pacific. CONCACAF was represented by USA and El Salvador.

Canada, unfortunately, did not qualify for the tournament, having been eliminated following a 4:3 loss to Trinidad and Tobago at the CONCACAF Beach Soccer Championship held in May of this year.

FIFA Club World Cup 2013 Morocco
Over the course of 10 days, the best club teams from each of FIFA’s six confederations as well as Morocco’s national champion squared off for global bragging rights.

This annual tournament began on 11 December and took place in two host cities, Agadir and Marrakesh.

CONCACAF was represented by CF Monterrey. The Mexican side played hard, but were knocked out by hosts Raja Casablanca 2:1 in extra-time.

Raja Casablanca’s surprised many at the tournament, not only by defeating CF Monterrey, but also South America’s Clube Atletico Mineiro 3:1 to advance to the final against FC Bayern München. However, the hosts were unable to overcome the Europeans, who celebrated their first FIFA Club World Cup with a 2:0 victory.

While no Canadian team qualified, referee Joe Fletcher was amongst those calling the shots. Fletcher and his crew were aided by the use of goal-line technology and vanishing spray – both were tournament first.

Fletcher is currently on the FIFA World Cup list and he’ll find out early next year if his performance at the tournament was strong enough to secure his place in Brazil 2014.