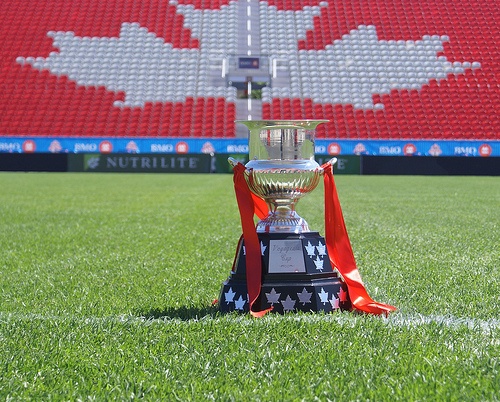 Opening leg of 2013 semi-final kicks off 24 April, live on Sportsnet and TVA Sports.

The opening leg of the 2013 Amway Canadian Championship semi-final stage kicks off on Wednesday 24 April in Toronto, ON and Edmonton, AB. The four Canadian professional clubs, Toronto FC, Vancouver Whitecaps FC, FC Edmonton and Impact Montréal, will battle it out for the right to represent Canada in the 2013-2014 CONCACAF Champions League.

As part of a new three-year agreement between the Canadian Soccer Association and Sportsnet for the Amway Canadian Championship, all 2013 matches will be broadcast live on Sportsnet. In addition, the 24 April and 1 May matches featuring Impact Montréal will be broadcast on TVA Sports.

In addition to the Championship website at canadasoccer.com/championship that will provide updated information throughout the competition, fans can also follow via Canada Soccer’s platforms (Twitter @CanadaSoccerEN, facebook.com/canadasoccer, YouTube/CanadaSoccerTV and flickr.com/canadasoccer) as well as the four clubs various media.

In the first of the semi-final stage, four-time defending champion Toronto FC will host Impact Montréal, the one other national winner in the Championship’s short history (2008), in a repeat of last year’s Eastern semi-final. Leg one of this semi-final will be played at BMO Field on 24 April (kickoff at 19.45 local, broadcast starting at 19.30 ET / 16.30 PT on Sportsnet East, Ontario, West and Pacific). The two clubs will resume their semi-final in Montreal on 1 May (kickoff at 19.45 local).

Vancouver Whitecaps FC will once again this year travel to FC Edmonton, the lone NASL club in this year’s Championship, for the other semi-final. The first leg of their semi-final will be held on 24 April at Commonwealth Stadium in Edmonton, AB with a 19.45 local kickoff (broadcast starting at 21.30 ET / 18.30 PT on Sportsnet East, Ontario, West and Pacific). The two clubs will meet again in Vancouver on 1 May (kickoff at 19.15 local) in the second leg of their semi-final.

The home-and-away Championship final will be played on 15 and 29 May.