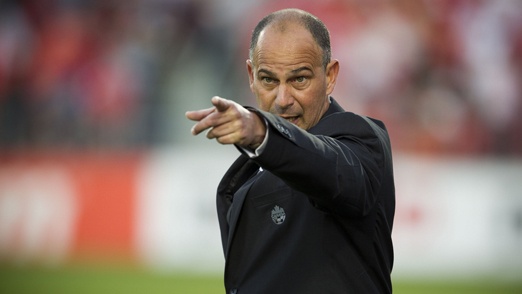 Canada posted a record of eight wins, two draws and two losses in a 2011 season that featured no shortage of thrills and spills for Stephen Hart’s squad.

Canada posted a record of eight wins, two draws and two losses in a 2011 season that featured no shortage of thrills and spills for Stephen Hart’s squad.

There was no shortage of meaningful matches for Canada during 2011 as nine of Canada’s 12 matches during the year were part of either the CONCACAF Gold Cup or the FIFA World Cup Qualifiers™.

Undoubtedly Stephen Hart’s side will be disappointed to have crashed out of the CONCACAF Gold Cup in the opening round, but the team rebounded strongly to cruise to a first-place finish in Group D in CONCACAF Round 2 of the FIFA World Cup Qualifiers™.

Atiba Hutchinson captained Canada on the night and the squad put in a valiant effort away to the 2004 European Champions. Despite the strong performance, Giannis Fetfazidis pounced on a defensive error to punish Canada and earn the 1:0 victory for the hosts in front of a boisterous crowd of 14,800 in Larissa.

Canada rebounded from the disappointing result in Greece with an impressive 1:0 win over Belarus on neutral soil in Antalya, Turkey on 29 March.

André Hainault was the match-winning hero on the day as he rose forcefully to head home a Will Johnson corner to earn Canada the win over their respected European opponents.

The team then returned home to Toronto for a friendly against Ecuador on 1 June ahead of the CONCACAF Gold Cup. It was simply a cracking contest.

Terry Dunfield opened the scoring against Ecuador with one of the best Canadian goals in recent memory. Dunfield received a square pass from Josh Simpson, shifted the ball to his right and unleashed a swerving hit from 30-plus yards to give Canada the 1-0 lead. It was also Dunfield’s first goal for his country.

Ecuador bounced back with a pair of goals and looked to be on course for the victory until Julian De Guzman and Tosaint Ricketts combined to score an opportunistic equalizer for Canada.

De Guzman played a quick free kick to Ricketts as Ecuador continued to protest the referee’s decision and the Edmonton-native buried the chance to score his first goal for Canada and earn his team the 2:2 draw.

CONCACAF Gold Cup
Canada’s next task on 7 June was opening the CONCACAF Gold Cup against a heavily-favoured American side in Detroit. Much to the delight of the Canadian squad, a strong contingent of supporters made their way to the match to ensure that Canada enjoyed vocal support in the North American derby.

USA opened the match with an imposing spell are were ultimately rewarded for their good play when Jozy Altidore snuck a quick strike under Lars Hirchsfeld to give the Americans the 1-0 lead.

Clint Dempsey doubled the advantage for USA in the 2nd half, finishing off a fine American counter attack to the give the home side a comfortable cushion.

To Canada’s credit, the team managed to create a number of chances in the final half hour which could have made for a grandstand finish. Substitute Ali Gerba was twice denied by the heroics of American goalkeeper Tim Howard and in the end USA came away with a 2:0 victory.

Canada then travelled to Tampa Bay where it rebounded with a crucial 1:0 win over Guadeloupe on 11 June.

Dwayne De Rosario converted a second-half penalty to earn the win for the Canadians after they had dominated much of the match but had failed to convert their chances.

The win over Guadeloupe set up a nervy clash against Panama on 14 June in Kansas City in which Canada needed a win to advance to the knock-out stages.

After Simeon Jackson and Julian De Guzman went close to giving Canada the lead, Dwayne De Rosario stepped forward again to score a second-half penalty to give his side the 1-0 lead.

But as Canada began to feel the pressure of its precarious position, Panama poured forward with its first consistent attacks of the match and ultimately the Canadians conceded an injury-time equalizer which inevitably knocked them out of the CONCACAF Gold Cup as the match ended in a 1:1 draw.

It was an emotional exit for Stephen Hart’s squad after Canada had come so close to booking a quarterfinal date against Mexico.

Canada opened its Brazil 2014™ qualifying campaign with a 4:1 win over St. Lucia in Toronto on 2 September.

Despite a nervy first half, Canada pushed forward in the second half of play to earn a comfortable victory over its Caribbean opponents. Two goals from Josh Simpson, as well as markers from Dwayne De Rosario and Will Johnson, earned Canada the victory.

The Canadian side then headed to Bayamón, Puerto Rico for its first away match of the qualifying campaign.

Canada again battled through an anxious start before eventually proving its quality with a 3:0 win over the Puerto Ricans. Iain Hume, Simeon Jackson and Tosaint Ricketts combined to score the goals to lead the way to a comfortable position atop of Group D after two games.

The squad next reassembled for the return fixture away to St. Lucia in Gros Islet, LCA on 10 October: it proved to be a historic day for Canadian football. Canada cruised to a 7:0 victory over St. Lucia in the nation’s largest-ever victory in a FIFA World Cup Qualifiers™ match. Simeon Jackson scored a hat trick on the night as Iain Hume and Olivier Occean chipped in with a brace respectively.

On the heels of its record victory, Stephen Hart’s squad fell flat in front of the home support in Toronto as Canada could only manage a 0:0 draw with Puerto Rico. The Puerto Ricans proved to be a well-drilled defensive unit and Canada simply could not unlock the defensive resistance of its opposition.

Still sitting comfortably in first place in Group D, Canada entered the final two FIFA World Cup Qualifiers™ of 2011 knowing that a single point would see them through to Round 3.

Canada drew St. Kitts and Nevis 0:0 in Basseterre, SKN on 11 November and earned the point that they needed to advance to the next stage of qualifying for Brazil 2014™. Stephen Hart and the players were disappointed not to have advanced with a more convincing result, but St. Kitts and Nevis proved to be a difficult opponent working tirelessly in front of their enthusiastic home fans in Basseterre.

If Canada and its supporters had been disappointed by two successive nil-nil draws the team ensured that the fans had plenty to cheer about on 15 November in Toronto as St. Kitts and Nevis paid a visit to BMO Field. Canada outclassed the Caribbean visitors on the night and notched a 4:0 victory to close out Round 2 of the FIFA World Cup Qualifiers™ in style.

Olivier Occean, Josh Simpson and Tosaint Ricketts were the scorers as Dwayne De Rosario converted yet another chance from the penalty spot to equal the record of 19 all-time goals for Canada.

The Final Word
By the numbers, 2011 was a strong campaign for Canada, but coaches Stephen Hart and Tony Fonseca will both know that Canada must continue to improve as the team heads into the more difficult rounds of qualifying for Brazil 2014™.

That being said, Canada posted an undefeated record on home soil earning two wins, two draws and no losses at BMO Field in Toronto. Full credit must go to the Canadian supporters for their part in creating a positive home environment for the team.

The growing interest around Canada’s involvement in international football generated an average crowd of 12,067 fans across the four home matches. More importantly, the Canadian soccer community came together to ensure that the home team enjoyed a positively pro-Canadian atmosphere during all three FIFA World Cup Qualifiers™.

On the pitch Simeon Jackson and Dwayne De Rosario led the way as Canada’s joint top goal scorers in 2011 with four goals each respectively.

Josh Simpson and Simeon Jackson were the only two players to feature in all twelve matches for Canada with Josh Simpson finishing the 2011 season as Canada’s leader in minutes played. Simpson featured in 937 of Canada’s total 1080 minutes of football in 2011.