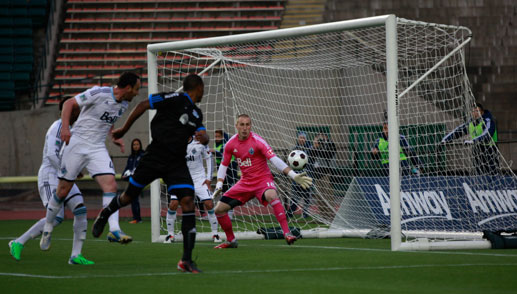 Vancouver come from behind to post 3:2 first-leg win over plucky Edmtonon side.

Two goals in the final 25 minutes allowed the Vancouver Whitecaps to overcome a one-goal deficit to win 3:2 over FC Edmonton Wednesday in the first leg of the semifinals of the 2013 Amway Canadian Championship in front of 2,838 spectators at Commonwealth Stadium in Edmonton, Alberta.

The hosts took the lead 2-1 in the first half with goals from Michael Cox and Chris Nurse in the space of 20 minutes.

Camilo Sanvezzo first gave the Caps the lead in the fourth minute of the game, after hitting a free kick from the left side of the pitch along the ground and past Edmonton goalkeepr Lance Parker into the bottom corner.

Cox tied it four minutes later when he headed a long ball sent it from his own end, above the goalkeeper Brad Knighton who was out to meet him, and into the back of the net.

In the 28th minute, Lance Laing sent in a precise corner kick that was redirected on a header by Nurse between the front post and the goalkeeper to give the lead to the Alberta club.

Camilo tied it again late in the game, when referee Silviu Petrescu awarded a penalty kick for a challenge in the area. The Whitecaps attacker did not miss his chance to make it 2-2 in the 83rd minute.

Vancouver closed the night out in the 88th minute when Nigel Reo-Coker beat his defender down the right wing and centered to Tommy Heinemann in front of goal. The first cross could only be cleared off the post by FC Edmonton’s Eddie Edward’s diving header and Heinemann was on the spot to finish it off from close range.

FC Edmonton coach Colin Miller was dismissed following Camilo’s goal for inapropriate remarks. He will therefore not be active for next Wednesday’s return match in Vancouver.

Martin Rennie made only one substitution in the 66th minute replacing Kobayashi with Tommy Heinemann.

Collin Miller made his first substitution in the 59th minute, sending Edem Mortotsi in the game to replace Robert Garrett. Sadi Jalali then replaced Michael Cox in the 85th minute of play.

The Whitecaps will host the return match of the semi-final at BC Place in Vancouver Wednesday, May 1 at 19.15 local time (22.15 ET). The match will also be broadcast live on Sportsnet.