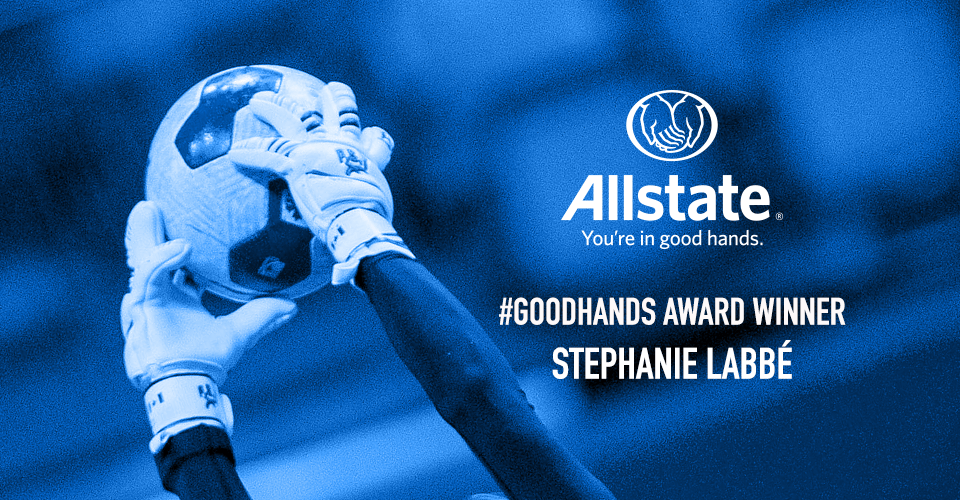 Canadian soccer fans have voted Stephanie Labbé’s penalty kick save against Sweden during the Algarve Cup on 6 March as the 2019 Allstate Canadian National Teams Good Hands® Award. The save occurred during kicks from the penalty mark following a 0-0 draw through 90 minutes in the match for third place.

With Canada ahead, Sweden’s Hanna Glas stepped up to the mark needing a goal to extend the match. Labbé read the shot and reacted swiftly, diving to her right to make a finger tip save, deflecting the ball past the post to secure a third place finish for Canada at the competition. The Allstate Good Hands® Award, which recognizes the top save by a Canadian National Team goalkeeper during international play, was chosen by fans during the online voting period which ran from November 18 through December 1. Allstate will present Labbé with the Good Hands® Award trophy at a future National Team home match. This is Labbe’s second time winning the award, the first time being in 2017.

“On behalf of Allstate, we are honoured to recognize Stephanie Labbé with the 2019 Allstate Good Hands® Award for her incredible, match-winning save at the Algarve Cup in Portugal.

“Congratulations Stephanie! I know that Canadians are very proud of your performance, and we stand proudly with you and Canada’s National Women’s Team as you proudly represent our nation and together we rise.”

With the presentation of the Canadian National Teams Allstate Good Hands® Award, an exciting fourth year of partnership between Canada Soccer and Allstate Insurance Company of Canada concludes. The multi-year partnership, which was launched in early 2016, has seen Allstate Canada and its Agents lending their support to Canadian soccer at every level, in close to 100 communities nation-wide.

The Allstate Good Hands® Award kicks off Canada Soccer’s 2019 awards season, which is celebrating the 27th year of the Canada Soccer Player Awards that were introduced in 1993. This year’s Players of the Year will be announced from December 9-12.

About Allstate Insurance Company of Canada

Allstate Insurance Company of Canada is one of the country’s leading producers and distributors of home and auto insurance products, serving Canadians since 1953. The company strives to keep its customers in “Good Hands®” as well as its employees, and is proud to be named a Best Employer in Canada for the eighth consecutive year. Allstate Canada is committed to making a positive difference in the communities in which it operates and has partnered with organizations such as MADD Canada, United Way and Junior Achievement. To learn more about Allstate Canada, visit www.allstate.ca. For safety tips and advice, visit www.goodhandsadvice.ca.