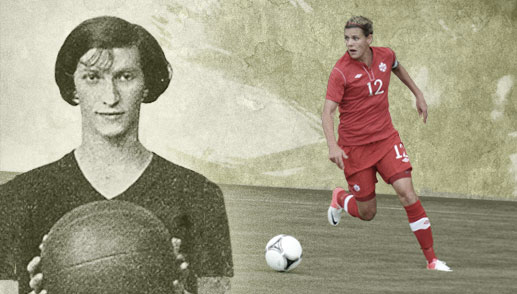 Christine Sinclair has been named winner of the 2012 Bobbie Rosenfeld Award, the distinctive Canadian Press Female Athlete of the Year prize. Sinclair wins the award after a memorable year on the international stage, one which included a national-record 23 goals, a CONCACAF silver medal at home in Vancouver, an Olympic tournament-record six goals including a legendary hat trick against rival USA, and an unforgettable bronze medal victory to close out the London 2012 Women’s Olympic Football Tournament.

Sinclair is the 52nd female athlete to win the award, albeit just the third from a team sport (summer or winter). The Bobbie Rosenfeld Award has been recognized annually since 1933. Sinclair joins previous team-sport winners Noel MacDonald (basketball, 1938) and Hayley Wickenheiser (ice hockey, 2007).

Sinclair set a national record with 23 goals in 22 matches in 2012, seven more than her previous record in 2007. With those 23 goals plus six assists, she was directly involved in nearly 66% of Canada’s 44 goals. She earned Player of the Match honours five times, including the night she scored a memorable hat trick at Old Trafford in Manchester at the London 2012 Olympics. She won Canada Soccer Player of the Month honours in May and August.

Her six goals at the Women’s Olympic Football Tournament set a tournament record, surpassing the previous record of five scored by Cristiane (2004, 2008) and Birgit Prinz (2004). As for Canada’s bronze-medal victory at London 2012, it marked the first Canadian medal in a summer Olympic team sport since Berlin 1936.