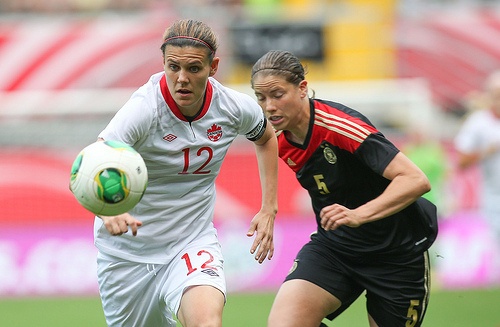 Sinclair is one of 10 nominees for the 2013 FIFA Women’s Player of the Year Award.

Women’s National Team forward Christine Sinclair has won just about every individual honour there is in soccer—but there’s still one she hasn’t claimed.

Sinclair is one of 10 nominees for the 2013 FIFA Women’s Player of the Year Award. Last year, Sinclair finished fifth overall in voting amongst all 209 FIFA-affiliated nations, but of that, she was second in voting amongst the top-24 nations.

The Burnaby-native had another great year, scoring eight times in 20 games for the Portland Thorns FC in the inaugural NWSL season.

She was also one of the scorers for the Thorns in their 2:0 victory over the Western New York Flash in the final as they claimed the NWSL Championship.

In 197 appearances for Canada, Sinclair has 145 goals.

Of the initial lest of 10 finalists, a three-player shortlist will be announced next month with the winner being announced in Zurich, SUI on 13 January 2014.