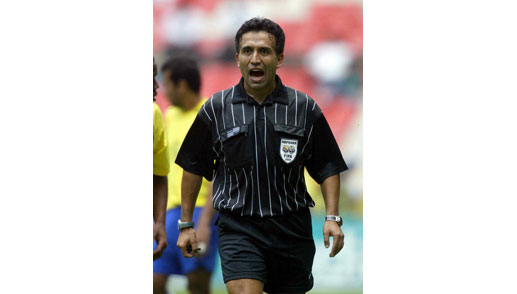 Navarro, originally from Chile but who made Vancouver his home, began refereeing in 1984 and worked his way up from refereeing in British Columbia to achieving FIFA Referee status in 2000. Since then he has refereed across Canada and the USA, in Major League Soccer, CONCACAF Gold Cup and Champions League games and in 2007 officiated at the FIFA U-20 World Cup in Canada.

One of the highlights of his career was the CONCACAF Gold Cup Final at the Azteca Stadium, Mexico where Mexico beat Brazil 1-0. More recently he officiated the high profile International Friendly at Empire Field between the Vancouver Whitecaps and English Premier League club Manchester City.

Héctor Vergara, Canada’s most experienced World Cup assistant referee with 14 matches in three different World Cups, recently retired as a FIFA Assistant Referee and was quoted as saying, “There are many referees in Canada that I have had the pleasure of meeting and working in different games with and every one of them brought something to my experience. However, there is one person in particular that I want to express my thanks to for his contributions to making me better. Mauricio Navarro, is the best referee Canada has had for a number of years, and we have officiated many important international matches together. He has always been a great friend, who has provided tremendous support and encouragement throughout his years on the FIFA list”.

Jose Branco, Referee Development Coordinator for BC Soccer said, “I am personally very grateful for his help in showing all match officials in British Columbia that with dedication and commitment, you can achieve great success and wish him the very best in his last International match”.

Rick Connors, Chairman of the BC Soccer Referees Committee stated, “Even with all these accolades, Mauricio has always had time to support and mentor officials of all levels in BC. He is a true ambassador to the sport and officiating both for Canada and BC.”