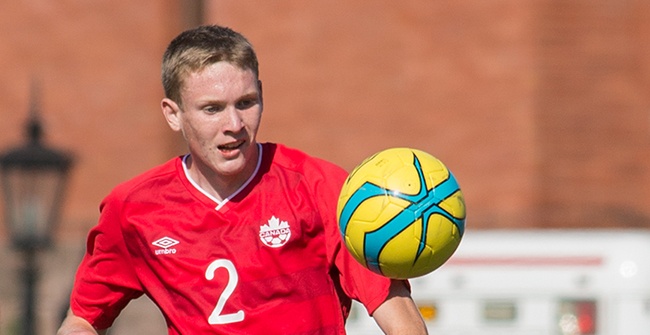 For the second year running

For the second year running Liam Stanley wins the Canadian Para Soccer Player of the Year Award. Stanley was hounoured by selection from the Canada Para Soccer coaching staff.

Stanley, 17, hails from Victoria, BC, and is in his fourth year with the program. “We had a number of players who arguably could have been awarded this honor,” says Head Coach Drew Ferguson, “but Liam’s dedication sets him apart. He is doing 100 per cent of the things he needs to do to improve and that’s what makes him player of the year.”

Throughout 2014, Stanley continuously showed his quality at training camps, competitions and, above all, in his off-field work. At the America Cup, his defensive abilities were instrumental in helping the team secure a fourth place finish and a berth in next year’s CP-ISRA World Championships.

Stanley’s ability to handle big game pressure is another reason why he has been selected, says Ferguson. “His understanding of the game is continuously growing and even against more experienced opponents, he’s able to read the game and get the tackles in that win back the ball to help transition into the attack.”

These attributes will serve the team well in 2015, where it will not only compete in the CP-ISRA World Championships (13 to 28 July) but also in the Para Pan Am Games (7 to 15 August).

Canada’s Para Soccer Team consists of players with Cerebral Palsy as well as those recovering from a stroke or head injury with similar symptoms. The team plays 7-a-side soccer, as managed by the Cerebral Palsy International Sport and Recreation Association (CPISRA).