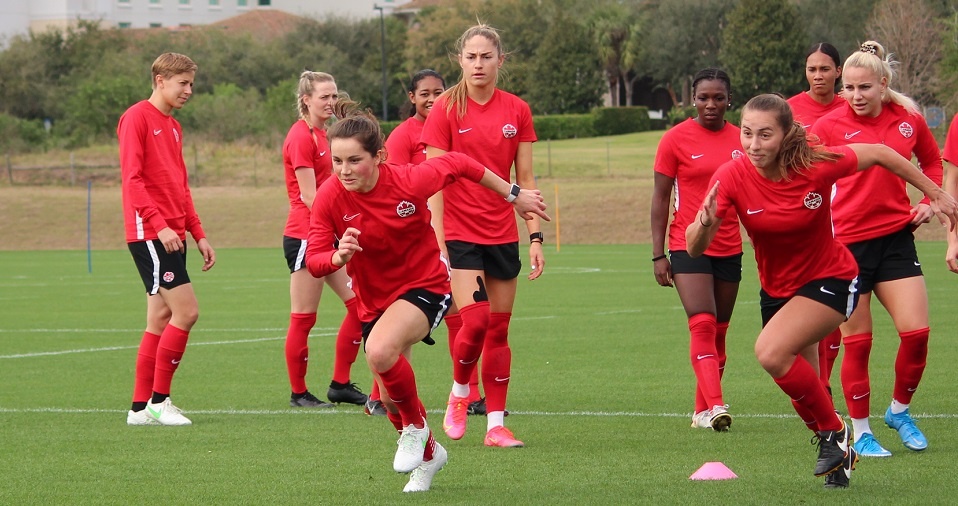 As part of the continued preparations for the Tokyo 2020 Olympic Games, Canada Soccer’s Women’s National Team is getting ready to face USA, Argentina, and Brazil at the sixth annual SheBelieves Cup presented by Visa from 18-24 February. This will mark Canada’s first participation at the four-team international tournament which will take place at Exploria Stadium in Orlando, FL, USA during the February international window.

Canada will begin the tournament when they face USA on 18 February at 19:00 local (19:00 ET / 16:00 PT), followed by Argentina on 21 February at 18:00 local (18:00 ET / 15:00 PT), and closing out the tournament against Brazil on 24 February at 16:00 local (16:00 ET / 13:00 PT). All three Canada matches will be broadcast live by OneSoccer and the USA and Brazil matches as special presentations on CBC and Radio-Canada. Fans will also find extended coverage across Canada Soccer’s digital channels on Facebook, YouTube, Instagram, and Twitter featuring the social media hashtag #CANWNT.

“It’s a really important year for us with the Tokyo 2020 Olympic Games coming up,” said Canadian midfielder Desiree Scott. “We are kicking off the year with a fantastic, challenging tournament in the SheBelieves Cup. Every time that we can get together before the Olympics is precious, and for us it all starts here for a big year to come.”

Canada have played the USA 60 times since 1986, most recently in the final of the Concacaf Women’s Olympic Qualifying Championship which ended up in a 3:0 win for USA. Canada also faced USA in a home-and-away friendly in 2017, that saw Canada draw the reigning FIFA Women’s World Cup Champions 1-1 on home soil in Vancouver before falling 3:1 in San Jose in the return leg.

This will be the 5th international meeting between Canada and Argentina since they first met on 24 September 2003 at the FIFA Women’s World Cup USA 2003. Canada has not faced Argentina since 2011 and has a record of four wins and no losses against the South American nation.

Canada most recently played Brazil to a 2:2 draw at the Tournoi de France in March 2020. Four years ago, Canada defeated host nation Brazil in the bronze medal match at the Rio 2016 Olympic Games to secure back-to-back podium finishes at the London 2012 and Rio 2016 Olympic Games. Canada earned the distinction of becoming the first Canadian team to win back-to-back medals at the Summer Olympic Games since 1908 as well as the first-ever women’s Canadian team to repeat on the podium.

“The SheBelieves Cup will provide a great opportunity for players to rise up and show that they can compete at this Olympic level, and also to assess the player pool and players’ readiness to achieve our goals at the Olympic Games”, said Bev Priestman, Canada Soccer’s Women’s National Team Head Coach. “I know that every player who puts on the Canadian jersey will give everything they have to get a result and make their country proud, so I can’t wait to see them in action against some of the best teams in the world.”

In 2020, Canada posted an international record of four wins, two draws and two losses, including a second-place finish at the 2020 Concacaf Women’s Olympic Qualifying Championship in February. Canada are one of just five nations in the world that have qualified for each of the past four Women’s Olympic Football Tournaments. Canada are also the only nation in the world to reach the podium at both London 2012 and Rio 2016 in women’s football.